We’re nearing the end of our stay on the beautiful island of Elba. That’s my son and his wife who live in America, my daughter and me.

Daughter and I down that first vital cuppa of the morning, then leave son and wife still snoozing in the villa while we go off exploring. Hearing barking we exchange grins, anticipating a happy doggie encounter. We’re as crazy as each other about every shape, size and colour of canine, but my daughter even more than I cannot pass a dog by without indulging in some serious cuddling.

And there he is, an English setter of all things, putting on a pitiful pretence of being fierce, poking his muzzle through the bars of the wrought iron gate. So happy to see us and have his head stroked and his ears fondled. Lovely boy!

Son and wife go off to buy OJ for breakfast while we lounge on the terrace among the olive groves and lemon trees, sea in the distance. Drinking tea, naturally. And then, who’s this padding around the corner into the garden and coming straight to us? It’s the setter! Can’t work out how he’s got out of those big iron gates, but we’re as pleased to see him as he is to see us. But delight soon gives way to shock. The poor boy’s hips stick out horribly. You can see all his ribs. There’s no flesh on him. He’s crawling with fleas and lice, and clearly in some pain. Now it’s obvious what through the gate wasn’t – the awful condition he’s in. He lies down on the stone flags, happy to be near us. I go to fetch my bath towel and fold it double to give him something soft to lie on. Then we rummage round the kitchen for food. He is starving. He eats everything we give him and drains a bowl of water. 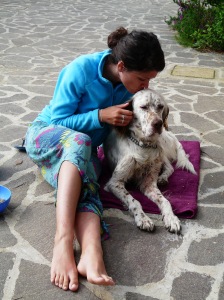 The others arrive back with the juice and go through the same process of delight fading into shock. We tell my son “Sorry, we’ve fed your entire packet of croissants to the dog.” Of course he doesn’t care about the croissants, he only cares about the dog, who is lapping up all the love and fuss coming his way.

After a while he must be getting anxious about playing truant because he sets off back home. We hope he won’t get punished.

We call him Ciambo. Last week in Rome, we feasted on doughnuts  from a little kiosk, and learned that a doughnut in Italian is ‘ciambella’. I break all the rules of language by converting the feminine to masculine to give our lovely Doughnut his name, Ciambello. Ciambo for short.

Later we stop at a supermarket in Portoferraio and get some dogfood. And a flea & tick collar. Daughter and I have the slightly scary mission of  sneakily coaxing Ciambo back to the gates, snipping off his old collar that had been digging into his neck for who knows how long, and fastening the new one on him. Hoping no-one will see us. And that no-one will notice the replacement collar. Considering his state of neglect, we seriously doubt anyone will. Then we feed him some of the dogfood through the gate, and tip water from a bottle into a bowl. The gardener’s coming  –  we flee!

Back at our villa we explode in a storm of anger over Ciambo’s heartless and so far invisible guardian. And when we calm down we agonise about what we should and can do for this sweet-natured, beautiful boy – so grateful for a touch of love, it’s breaking our hearts. None of us can bear to leave him like this. There is that pure wordless bond between him and us.

(This was two and a half years ago, and writing this is still making me cry)

It’s evening. Son and wife research online – and discover that in all likelihood poor Ciambo has a condition none of us has ever heard of before, Leishmaniasis, apparently rife around the Mediterranean. Prevention is indeed much better than cure, since Wiki tells us that this disease, carried by a sandfly, is usually fatal. It seems we are too late with our flea collar. We start to feel even sadder.

All four of us are up early and ready for action. Daughter and I set off climbing the steep track to Ciambo’s garden to implement the first phase of the plan on which we are all resolved. At the iron gates we call him quietly. Nothing. We circle the garden perimeter calling just loud enough for our boy to hear us but soft enough not to let the sound be picked up by the still invisible owner indoors. There’s no sign, Ciambo’s not responding. We’re starting to feel desperate and hover, indecisive, trying not to look suss, when daughter notices a slight agitation in the bushes – it’s him! Hearts thumping, we ease open the creaking gates and smuggle him out. He limps along with us back down to our villa, and we carefully, gently lift him into our car.

Yesterday coming back from Portoferraio I noticed a sign at the side of the road, ‘Veterinario’. That’s where we are headed. The vet’s surgery is down a long track and when we arrive outside we can see no sign of life. I read a notice in the window which informs us that the vet is away for three days on a conference. Of all the times to go to a conference!

What to do now? We think of Tourist Information in Portoferraio. Maybe they can tell us where we can find a vet. I seem to get volunteered for the job of asking. The charming lady prints me a list of vets on the island. With difficulty we navigate our way through narrow back streets to the first on the list. It is closed. We repeat the process for the second on the list. It’s not even there any more. Starting to panic. Trying no 3. The satnav guides us into a supermarket carpark ??? Now seriously anxious, we ask a mama pushing a trolley of groceries to her car, and to our relief she tells us, yes, there is a vet’s, it’s around the back of the supermarket.

Finally! We’re in the tiny waiting room. The waiting room is full, and the Italians are glaring at us, no doubt thinking we are the monsters who’ve reduced Ciambo to this state. Then it’s our turn. We lie. We tell the vet that he’s a stray we found. Suddenly the room breaks into applause and there is much chatter and smiles and congratulations. The vet says we must take Ciambo to the island’s Animal Welfare Officer, and one of the women there offers to show us the way to the AWO’s office. Which is lucky since it is even harder to find than the vet’s.

We follow her car into a weedy cobbled courtyard, discarded boxes and a broken trolley in one corner, surrounded by derelict buildings. The woman indicates a dilapidated door with a broken pane of glass. We are more than dubious. But the woman’s gone. Knocking yields no results. The door is locked, the office closed. As we walk helplessly around the building peering through windows, the AWO arrives in her car. Her name is Roberta. This time we tell the truth, and Roberta exclaims, “You can’t just kidnap somebody’s dog!” But adds, “But I’m very glad you did.” Inside, she examines him as we kneel on the floor round him,  stroking him gently, and crying, all of us. Son and wife want to take him back to America with them. Daughter wants me to drive him back to England. I’m the one who has to force head to rule heart – even supposing Ciambo’s guardian were willing to let him go, there would be mountains of red tape and no chance of getting through that before we leave first thing tomorrow morning. More importantly, he is in no fit state to travel and might well not survive the journey. And if he did make it he would have to be quarantined on arrival which could well be crueller than leaving him behind.

While we dream up impossible plans, Roberta has phoned the police.

What Happens Next? Part 2 coming soon