The hen “puts more light into every day.”

Why throw the spotlight on to hens? Well, because these sweet and fascinating birds are overlooked and underrated. That’s one good reason. Another I’ll come to shortly.

Each of my own feathery girls, Rosa, Juliet and Tiddlo, had a definite and distinct personality – which would come as no surprise to anyone who has had the pleasure of sharing companionship with hens. Tiddlo was ring leader and bold as brass. She led the charge of the troops into the house whenever the back door was open. Back in the garden, collie dog Jim would put his jaws around her neck and shake her gently from side to side. She was quite unfazed. Back on terra firma and with barely a ruffled feather she’d carry on where she left off, scratching at the grass for tasty worms. All three have long since moved on to contented clucking in hen heaven.

You’ll notice I’m choosing not to call hens ‘chickens.’ This is how the dictionary defines ‘chicken’:

A domestic fowl, Gallus domesticus, descended from various jungle fowl of southeastern Asia and developed in a number of breeds for its flesh, eggs, and feathers.

See what they’ve done there? Reduced this living, breathing, thinking, feeling creature to nothing more than a commodity.

So what is it we need to know about hens? 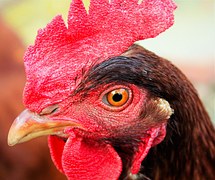 1 As I mentioned, hens have personalities. Some are a little nervy and jumpy like Rosa, others curious and bold like Tiddlo. We may find one hen gregarious, and another aggressive. Some love human company, some are more standoffish. Like dogs or cats and (unlike children !) many will answer to their names and come when they’re called.

2 Hens are brainy. Far from being birdbrained or featherbrained (where did that notion come from?) hens can outperform dogs, cats and 4 year old kids in some intelligence tests. As Dr Christine Nicol says, “Studies over the past 20 years have… revealed their finely-honed sensory capacities, their ability to think, draw inferences, apply logic and plan ahead.” (Delighted to see that Christine, author of review paper ‘The Intelligent Hen’, agrees with me on the preferred name for the animal!)

In one test, hens were taught that if they refuse a food reward in the present, they will receive more food later on. Remarkably, or maybe we shouldn’t be surprised at their good sense and patience, ninety-three percent of the birds chose to hold out for the later but better option.

In this sweet short video, watch what this hen can do with a dice.

Hens are curious and like to investigate new things. Hens learn from observing the successes and failures of each other, and pass cultural knowledge down through the generations. They ‘get’ cause and effect. They realise that objects still exist even when hidden from sight. 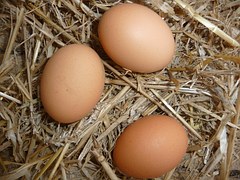 3. Hens talk. Don’t you just love that clucking! It’s the most soothing sound. But it’s a lot more than just a comforting, homely noise in the background. Researchers have identified at least 30 different kinds of vocalisations hens make. Amazingly hens have one cluck for a threat coming their way over land and a different cluck for danger approaching by water. A mother hen even talks to the developing chick inside her egg, and the unhatched chick talks right back to mum. Wouldn’t it be lovely to know what they are saying to each other. 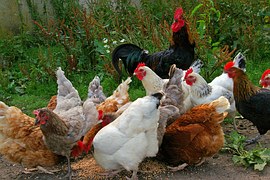 4. They have their own complex society – that is if humans allow them the kind of life that Nature intended – the well-known pecking order in which each hen knows its own rung on the social ladder. Hens can know the faces of more than a hundred other hens and remember where each one’s place is on that ladder.

5. Just like us, they have deep feelings. They love their families. Nigh on 2000 years ago Plutarch remarked,”What of the hens whom we observe each day at home, with what care and assiduity they govern and guard their chicks? Some let down their wings for the chicks to come under; others arch their backs for them to climb upon; there is no part of their bodies with which they do not wish to 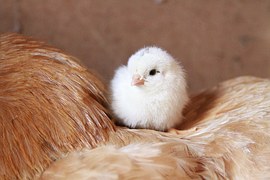 cherish their chicks if they can, nor do they do this without a joy and alacrity which they seem to exhibit by the sound of their voices.” Mother Hens par excellence! 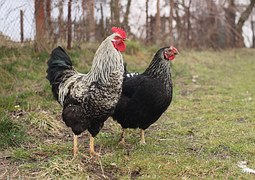 They sometimes find true love. While it’s more usual for a rooster to mate with several hens, it has been known for a rooster and a hen to form a profound and unshakeable bond of love.  In my next post I plan to bring you the deeply moving story of Libby and Louie, one such pair for whom existence without the other would have been but as the dust they scratched in .

As well as caring for their families, they also look out for the other hens in their group. They can forge lasting friendships, and like to hang out with their best buddies. And sometimes the buddies are not other hens! Thousands have already seen this beautiful 14 second video, but a second, third or fourth viewing still melts the heart.

6 Hens’ calming influence has not gone unnoticed. Now we have ‘therapy hens’.  Inmates of Scotland’s Saughton and England’s Holloway Prisons enjoy their soothing presence. “[The birds] have got such a therapeutical effect on you so it’s brilliant,” said one of the inmates working on the Saughton project. “It puts more light into every day.”  The Holloway hens are rescues, restored to good health by the prisoners. 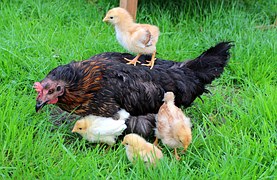 These wonderful animals are also working their magic among children, the elderly and the mentally ill. We hope the interaction is mutually beneficial.

7 Sleeping with a hen next to your bed helps prevent malaria, dengue fever and zika. Yes, truly. A study was conducted in Ethiopian villages and found that Anopheles arabiensis, one of the main mosquito species spreading malaria in sub-Saharan Africa, according to the World Health Organization, was repelled by chicken odour.  Although it’s early days, the research could pave the way for a chicken-scent repellent being introduced on the market – Take Part

Now we come to number 8 – and this tragic fact is my other reason for putting hens in the spotlight today – though this is less about them and more about humans:

Many billions of farmed animals are killed for food each year, virtually all having been bred for that sole purpose. Chickens account for the largest number of these animals, with an estimated 20 billion slaughtered annually. There are almost triple the number of chickens as there are humans in the world, and a huge number of people eat chicken most days, or even several times a day – Faunalytics

Sadly, because many people have heeded warnings about the health negatives, and have seen graphs like this comparing the carbon footprints of chicken and red meat, they’ve replaced their lamb, beef and burgers with chicken and nuggets. 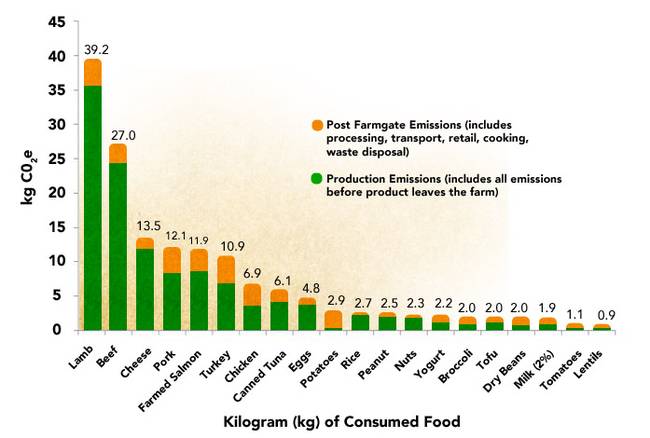 As a result we get a graph like this – 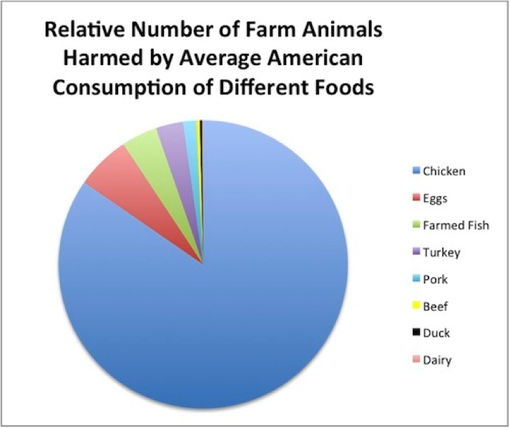 One Step for Animals has come up with a radical proposal for advocacy intended to reduce animal suffering, and this is it: Given that it takes more than 200 chickens to provide the same number of meals as one cow, we must avoid anything that risks encouraging anyone to replace red meat with chickens. Conversely, if we can convince someone to stop eating birds, they would go from being responsible for the factory farming and slaughtering of about two dozen land animals per year to fewer than one.

Their surprising argument, that makes pragmatic sense but I suspect will be anathema to many animal advocates, goes like this: though all animal suffering is a gross injustice, isn’t it better for one animal to suffer instead of two hundred? They back this up by quoting economist and Nobel Prize-winner Herb Simon, that people do not make perfect or optimal decisions (eg giving up animal products altogether and going vegan). It’s much more usual for people to base their choices on what is a bit better or, good enough. So if people can be persuaded that if they want to carry on eating meat they should eat beef rather than chicken, it’s better because fewer animals suffer and die. And you’re more likely to succeed in persuading them of that than in getting them to go vegan overnight.

We know individuals who evolve over time to full vegetarianism or veganism are more likely to maintain that change (a major consideration given the overwhelming 80% rate of veg recidivism). Obviously, any journey has to start with the first step. We should shape our message such that the one step is seen as “do-able” for our audience and also as meaningful as possible for animals.

I’m not sure what to think about One Step for Animals, but what Professor of Veterinary Science John Webster says about modern chicken production can scarcely be denied:

“In magnitude and severity [it is] the single most severe systematic example of man’s inhumanity to another sentient being.”

For everyone who wants to make the world a kinder, friendlier place – if you haven’t already, take a step and leave these incredible underrated animals off your plate.

And consider going vegan for the animals

If Rembrandt Painted Farm Animals, They’d Look Like This

Pragmatism – The Art of the Possible Working for Animals

Why You Should Give a Cluck About Chickens – World of Vegan

11 thoughts on “8 Things Everyone Needs to Know About Hens”