Plus, in the pic below, discovered by biologist Vazrick Nazari the very first species to be named after the new president. How do you reckon the little moth’s coiffeur shapes up? 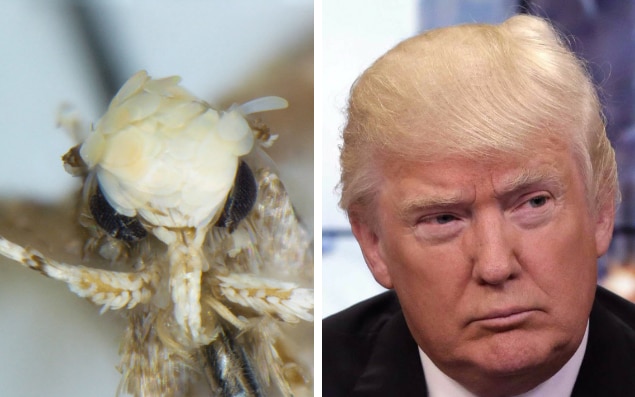 “The new species is named in honor of Donald J. Trump,” Nazari wrote in a review of the species. “The specific epithet is selected because of the resemblance of the scales of the moth to Mr. Trump’s hairstyle.”

Nazari continues:“The reason for this choice of name is to bring wider public attention to the need to continue protecting fragile habitats in the U.S. that still contain many undescribed species.”¹

From this day forward, environmental protections, animal welfare regulations, and the Endangered Species Act² are all under threat. Indeed the newly elected GOP majorities on Capitol Hill didn’t even wait for Inauguration Day to begin the dismantling process.

Time for all activists to take our cue from the incredible community at Standing Rock and come together in solidarity for the majestic lands and wildlife of America – and indeed of the world, for the new president’s environmental reach will extend far beyond the United States.

“Trump is a businessman, and that’s all he thinks about … what will make money”

On some of these crucial issues the new president may find himself out of step with his people, even those who shoehorned him into the White House. The results of a Reuters/Ipsos poll for instance, published on Tuesday indicate that 60% of Americans would like to see the Environmental Protection Agency’s powers preserved or strengthened, and the drilling of oil on public lands to hold steady or drop.

“Trump is a businessman, and that’s all he thinks about … what will make money,” said Terry Cox, a 61-year-old resident of Tennessee who voted for the New York real estate mogul in November’s election. “But I’m hopeful there’s a limit to what he can do when it comes to weakening protections for wildlife and the environment.”  Reuters

If you want to know exactly what we’re up against, check this out.

The minute the man was declared winner of the 2016 presidential election, ecowarriors and animalistas, not to mention anti-racists, anti-sexists and human rights activists, set to work devising strategies to thwart his bigoted and planet-unfriendly intentions.

Rebecca Leber for one, wasted no time. On November 22  she published  5 Ways to save the environment in the age of Donald Trump. Her recommendations include “Apply public pressure”, Win the States”, and “Sue the bastards”.

If you want to wo/man the barricades, as I hope you do, against the demolition of all the hard-won environmental,  farmed animal and wildlife successes activists have spent decades giving everything they’ve got to achieve, join forces with the Sierra Club and/or the Center for Biological Diversity. The Center is not going to be caught on the back foot. It’s all ready with a defiant and ambitious 23-point plan for the first 100 days of the new presidency.

You can help straightaway by signing the Center’s Pledge of Resistance to Donald Trump’s Assault on America’s Environment, Democracy and Civil Rights.

And if you are a US citizen make a quick phone call to your senator’s state office to express your opposition to the appointment of climate change denier Scott Pruitt to head up the Environmental Protection Agency. That would be funny if it weren’t so horribly worrying. Pruitt was, in his campaign for the post of Oklahoma’s Attorney General, sponsored by the fossil fuel industry . Details for the phone call here.

Also welcoming your support, the Animal Legal Defense Fund, the Humane Society of the United States, or any of the other many campaigning groups that are on the right side of history.

“No one could make a greater mistake than he who did nothing because he could only do a little.” Edmund Burke

Wouldn’t it be wonderful if the new President of the USA could take 63 seconds out of his busy schedule to inform himself of the great legacy for the environment and wildlife ex-President Obama has left behind from his years in office?

But sadly, there’s no doubt it would just provide Mr Trump with an aide-memoire of the stuff he’s already pledged to undo.

We will miss you Barack.

What Trump’s Triumph Means for Wildlife