“Just as human beings have human rights, all other beings also have rights which are specific to their species or kind and appropriate for their role and function within the communities within which they exist.”

The Universal Declaration of Rights of Mother Earth

Nature has Rights! And not just in our wishful pipe dreams. Two countries hit the headlines recently with court rulings acknowledging the legal personhood of three rivers. In New Zealand the Wanganui River, and the Ganges and Yamuna Rivers in India now have rights. On 31st March India granted Himalayan glaciers the same status. They are legal persons.

A similar judgment has been made in Costa Rican law courts for the planet’s second largest reef which happens to lie in their waters.

Costa Rica’s not too distant neighbour Ecuador was already well ahead of the game – in 2008, the first country in the world to embed in the nation’s constitution itself, the Rights of Nature. The constitution was then put to a referendum of the people, and they voted yes. Ground-breakers indeed.

The EU is lagging behind! But there is hope, as we will see. First, how law for Nature operates in most countries of the world now.

The law with reference to Nature at present stumbles along under one of three paradigms. All outdated, none holistic. Take your pick:

But we already have laws to protect wildlife and the environment – like our own UK Wildlife and Countryside Act. So why does Nature need legal Rights?

Generally speaking – though as we have seen there are exceptions – the law as it stands recognises only two kinds of ‘holders of rights’: humans and human-created entities such as corporations. Everything else – animals domesticated, farmed and wild, land and water, Nature itself – is ‘property’. Nature our thinking goes, belongs to us, is our possession. So laws of protection that come, can just as easily go, depending on the prevailing governmental winds.

The classic example is the USA’s iconic gray wolf, already extinct over most of its historic range. The wolf was listed under the Endangered Species Act in 1974, delisted in 2012, relisted in 2014, and now once again loses  protection in Alaska, in national wildlife refuges fgs, under Trump. The man is hell bent on sweeping aside just about every protection U.S. wildlife and wild places – so hard striven for over decades – now enjoy. If ever there was someone out of tune with Nature….

Rights on the other hand give the highest level of legal protection.

Rather than treating nature as property under the law, Rights for Nature… acknowledge that nature in all its life forms has the right to exist, persist, maintain and regenerate its vital cycles.  And we – the people –  have the legal authority to enforce these rights on behalf of ecosystems. The ecosystem itself can be named as the defendant [and in courts of law we can be its advocate]. 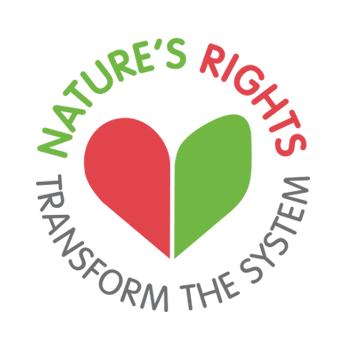 The European Citizens Initiative scheme was established five years ago with the aim of increasing direct democracy by enabling “EU citizens to participate directly in the development of EU policies”. Now, a group of lawyers, environmentalists, academics and others from 13 EU countries have come together in a project to present the Rights of Nature to the EU Commission and get those rights enshrined in EU law.

Humanity flourishing in harmony with Nature.

To establish nature’s rights – legal personality and rights for ecosystems and other species – in law throughout Europe.

To launch a European Citizens’ Initiative to propose nature’s rights to the legislative agenda of the EU – see our Draft Directive.

Ecosystems and other species are alive. Yet the law treats them as objects separate to us. This has wide reaching social and economic consequences that drive the environmental crisis. Rights of nature is a game changing solution that brings fundamental and systemic transformation to our legal and economic system by re-characterising nature – ecosystems and species – as a subject of the law with legal personality and tangible rights that can be defended in court by people. This ensures that economic activity operates to enhance rather than undermine the resilience of ecosystems so that humanity can thrive in harmony with nature. It forms a powerful counterbalance to corporate rights and a viable alternative to the financialisation of nature.  To find out more see this article – Rights of Nature – Why Do We Need It? and this TEDx Talk.

Nature needs us to create new legal systems that promote

Sadly, since the European Citizens’ Initiative first came into effect, only three ECIs have managed to collect the 1 million signatures required for a response from the EU Commission. And of those three, only one was approved for a follow-up proposal. (One of those rejected by the Commission was a proposal for the European Anthem to be sung in Esperanto!)

But with our support the chances for the ECI – Rights of Nature are hopeful. And here are ways you can help

If you have skills in the following areas and would like to be involved in co-creating this exciting history-making initiative, please get in touch with Mumta Ito, as representative of the organising committee, at mumtaito@gmail.com. The specific areas additional assistance is needed are:

Offers of skills support could be in a purely ‘advisory’ capacity or more hands-on – (no offer of assistance is too small). To be kept in the loop subscribe at the Being Nature Project.

We look forward to hearing from you and to creating together the legal frameworks needed to form a more resilient, thriving world for all of our future generations.

Of course here in the UK we have Brexit looming. But until the two years after the triggering of Article 50 is over, we can still have our say and make our contribution.

It’s true UNESCO already has its own Earth Charter, approved at a meeting of the Earth Charter Commission in Paris in 2000. It lists four Principles. The problem for me lies in Principle Two :

a. Accept that with the right to own, manage, and use natural resources comes the duty to prevent environmental harm and protect the rights of people.

That strikes me as reinforcing the status quo, the rights of Man to treat Nature as property – more a denial of the Rights of Nature than part of a charter to protect them. I would like to see UNESCO replace the Earth Charter with the Universal Declaration of the Rights of Mother Earth which places Man not bestriding the Earth, above Nature with the right to own it and use it, but as just one thread in the complex web of life, each part of which is every bit as entitled to rights as are we humans.

Two hugely important questions arise for me from discussion about the Rights of Nature.

The first, for those of us who are dedicated to Animal Rights: if we achieve legal Rights for Nature, what does that mean for nonhuman animals? Does it mean that animal advocates like the Nonhuman Rights Project should cease the legal battle to win personhood for individual chimpanzees like Tommy, and throw its weight instead behind the fight for Rights of Nature?

Does it also mean that if nonhuman animals have the right to live at liberty in their own natural environment without interference and exploitation from humans, that the farming of animals would cease?

That we would get the vegan world of which we dream? A sentence in the Declaration seems to say so:

Secondly, as the capitalist system is based on extracting Nature’s ‘commodities’ and exploiting animals, human and nonhuman in the pursuit of profit and ‘growth’, don’t we need a new paradigm not just for law, but for world economics too?

Maybe I can explore these questions further at a later date, but now I would greatly value your ideas and comments on this immense subject.

Through Artist’s Eyes- The Wondrous Web of Life & Death

Being Nature – Extending Civil Rights to the Natural World – The Ecologist

Global Alliance for the Rights of Nature

ECI for the Rights of Nature – International Centre for Wholistic Law

Revising the ECI: How to make it ‘fit for purpose’ – Euractiv

10 thoughts on “The Rights of Nature”