It’s mystifying, isn’t it? We find ourselves suffused with joy watching the sparrows bathing in the bird bath, spotting bees, butterflies and dragonflies on a walk, discovering a small crab in a rock pool, watching swallows gathering on a wire in autumn, hearing the geese migrating south for winter, or stroking a donkey over the fence. We can’t let a dog or a cat walk by without moving in for a cuddle or a stroke, and telling them how beautiful they are. But most of all we love our own fur babies, sometimes (often!) more than other humans. So how can it be that there are actually people who couldn’t care less? It’s incomprehensible.

But it’s a fact. If the presence of companion animals in the family is the measure of this phenomenon, it’s a 50/50 split, half of us love’em, the other half doesn’t. Here in the UK anyway.

(Canines or felines? Another 50/50 split, 10 million of each. But let’s leave the dog v cat debate for another day.)

If you’re in the weird 50% – the animal un-lovers – you probably wonder what we get out of caring for our dogs – they bark, need constant walking and a steady supply of poop bags. Or our cats, who have no sense of loyalty or gratitude, scratch the furniture, and are alternately aloof or needy and demanding.

We could tell you companion animals are therapeutic for us. Studies show they lower their human’s blood pressure, alleviate loneliness and depression, boost the immune system, and increase our lifespan. Apparently though, there are just as many studies that show our beloved furry friends confer no health benefits. And we who live with them live no longer than those who don’t. Health and longevity is more to do with where you fall demographically than if you live with a fur baby – which incidentally, you’re more likely to do if you’re married, white, a woman, wealthy and own your own home. All of which happen to be predictors for better health and longer life as well – nothing to do with beloved Fido or Felix. Well, whatever the studies say, we on the animal-loving side couldn’t imagine life without them.

So why the split? Nature or nurture?

We all assume that if you grow up with animals, in a family that loves animals, your fate is sealed – in a good way. The best. It’s as simple as that. I grew up with 3 cats, a dog, rabbits and a goat, and a mum who loved animals, so that works for me. I’ve never lived without a nonhuman animal by my side. How about you? 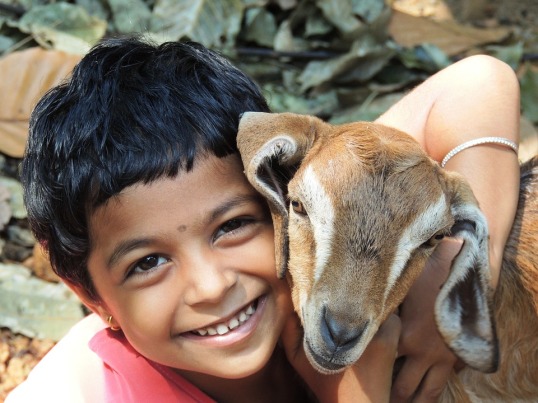 But there’s a little more to it than you might have thought. First let me ask, have you heard of anthrozoology? It is, it seems, a new science “dedicated to discovering the true nature and depth of the human-animal bond” – news to me too, but I like it! (NB though all you anthrozoologists out there – humans are animals too).

In his book “The Animals Among Us”, leading expert in animal behaviour and anthrozoology, John Bradshaw traces the thread back to our ancient ancestors to unravel how living with other animals shaped our own evolution as well as theirs.

How did some animals become domesticated in the first place?

Dogs became distinct from wolves, cats from wildcats, cattle from wild oxen, sheep from wild mouflon and so on, between 15,000 and 5,000 years ago, their DNA tells us. But how did those genes for tameness evolve? Because at any stage, if the semi-tame animals got to mate with their wild cousins, the tameness genes would be diluted, and there would be no domestication. To prevent that, we humans had to keep ‘our’ animals apart, inaccessible, by physically containing them in our own habitations. And so we developed an emotional attachment to the creatures who lived among us.

Through the generations, passing those tameness genes down, the cats and dogs, cattle and sheep gradually got tamer. And at the same time humans with empathy for the animals and with skills in animal husbandry thrived, and passed down their own evolving animal-loving genes to their descendants. Meanwhile, those who didn’t go to the trouble of keeping domesticated animals but continued to rely on hunting, were fading out.

The creature-carers were winning the evolutionary war.

In that case, how did we arrive at the 50/50 split? Where did the animal un-lovers come from?

John Bradshaw conjectures that at some point in history, those guys who were not living with domesticated animals came up with the brilliant idea of letting those who were (our half of the equation), do all the work, and then raiding us, stealing the animals and taking us slaves. Let’s call it the Genghis Khan M.O. And so the animal un-lover population made a comeback. (We must assume their raids weren’t always successful, or else it would have been our half dying out!)

Genghis Khan makes a good metaphor for ruthless raids and pillage, but since he made his entrance on the world stage a mere thousand or so years ago, he can’t be held personally responsible for the tribe that were evolving into animal un-loving raiders several thousand years before that. But you never know, it’s perfectly possible he was a descendant of them. Whatever, it’s a fascinating fact that 1 in every 200 men in the world alive today is a direct descendant of Genghis Khan. Crazy, but true. It would be even more fascinating to know if all those 16 million guys are genetically predisposed to be indifferent to animals!

But back to serious science. When it comes to engagement with companion animals, a 2015 study designed to disentangle nature and nurture, found that “genetic factors accounted for as much as 37%” of the difference in middle-aged men. Why not women? Who knows. But anyway, animal loving is in the genes!

At least in part, you really are genetically predisposed to love, or be indifferent to other animals. It’s a trait you have inherited – as well as learned – from your parents, and your parents’ parents before them. And so on, back to the time when your ancestors chose one of two different paths, to domesticate or to hunt and raid.

Now we come full circle.  Other recent studies show that we really are two entirely different tribes. If you love animals, you will love Nature too. Or if indifferent to the one, you’ll be indifferent to the other. “It seems that people can be roughly divided into those that feel little affinity for animals or the environment, and those who are predisposed to delight in both.”

Why are we not surprised?

If you love animals and care about the environment, and even if you don’t but care about your own health, cut back on the meat and dairy. Find out why that’s a good idea here. 10 top tips for doing it here

If you are thinking of bringing a companion animal into your home, please #AdoptDontShop  Just look at these sad statistics:

And they are not just numbers. Each one an individual longing for a loving home.

Postscript If you struggle to make sense of my exposition of human and non-human animals’ evolution in pre-history, you may need to read John Bradshaw’s book, where he does it at greater length, and so much better.

Get Your Pet Fox Here

7 thoughts on “You Love Animals, Right? Ever Wondered Why Others Couldn’t Care Less?”