The African Grey Parrot, prince of prattle, pre-eminent among a small bevy of birds with the ability to speak the language of humans.

Occasionally when one of these awesome birds is thrown into the human mix, strange things happen. And so it was that in one utterly bizarre murder case that involved a crossbow, psychics, and mysterious death threats between members of the victim’s family, the bizarrest element of all was the key witness to the crime – an African grey by the name of Bud. What began as a domestic dispute in the home Bud shared with his humans, ended with a 48 year old woman shooting her husband.

After the calamitous incident, Bud was heard saying in a deep man’s voice,”Get out,” followed by the woman’s voice saying, “Where will I go?” The man’s voice answered, “Don’t f—ing shoot.” Extraordinarily, Bud appeared to be repeating the couple’s final argument.

Damning evidence in the case? “The case’s prosecuting attorney said he wasn’t aware of a precedent allowing a parrot into a trial, but would look into whether Bud could serve as admissible evidence.” In the event, Bud wasn’t called to take the stand. After all, who’s to know if he was giving testimony to that tragic event, or simply imitating a TV show he’d once seen? Despite the lack of testimony from the crime’s only witness, the woman was convicted.

Experts, acknowledging the incredible brain power of these birds, admit it is possible Bud could verbally re-enact an incident observed just once – but unlikely. The fact remains though, these birds are truly remarkable mimics. Not only can they produce the sounds of human words, but they can even imitate to near perfection different voices and tones of voice, a feat that is pretty exceptional among their fellow avians.

How do they do it?

Cognitively? An extra layer, literally, of grey matter inside the little psittacine skull.

Why do they do it?

In the wild, a lone parrot is a dead parrot. Learning new songs and sounds helps them bond with their mate and fit into the flock. In captivity, by learning to speak like us, the parrot is saying to its humans “Please let me be in your flock”.

The Goffin’s cockatoo. A study reveals that these cockatoos who are not tool-users in the wild, can learn to create tools to solve a problem reaching food. If that doesn’t seem surprising, we should take into account that these birds had never experienced this kind of test before, and yet actually performed in it better than many 8 year old children.

Their beauty is their downfall

Of course it’s not just the parrots’ cheeky personality, startling ability to mimic us, and sheer brainpower that make these animals so appealing. Their plumage makes a vivid splash of colour in their forest habitat, and sadly it’s that very plumage that puts them in jeopardy. It seems humans suffer from feather envy and covet that finery for themselves. In the 19th century, thousands upon thousands of these dazzling creatures were killed so their gorgeous feathers could decorate fashionable ladies’ hats.

Today in spite of CITES they are still – illegally – being plucked from forests and jungles, with the result that 66 parrot species out of 375 have been put on the Endangered Red List. The South American Blue-throated Macaw is one of the rarest – there are only about 250 birds left.

And the beauty of this parrot creates a particular problem. On the Moxeño plains of Bolivia ‘macheteros’ (meaning anything from ‘cane-cutters’ to ‘revolutionaries’ – take your pick) hold fiestas where they dance to the music of bongos and flutes in celebration of the colours of nature – the colour that ironically by this very celebration they are causing to disappear. Because macheteros traditionally wear brilliantly coloured headdresses made from the feathers of 4 types of macaw, including the Blue-throated.

But there is good news. The Asociación Armonía (BirdLife Partner in Bolivia) has come up with the ‘Alternative Feather Programme’. It involves workshops held in local schools to teach the macheteros to create their own ‘feathers’ out of organic materials found locally. Since each headdress is made of approximately 30 central tail feathers, “one headdress of artificial feathers saves at least 15 macaws,” explains Gustavo Sánchez Avila, Armonía’s Conservation Programme coordinator for the Blue-throated Macaw.

In 6 years this program has saved 6000 individual birds of the 4 macaw species, involved thousands of local people in the conservation of Bolivian nature, and provided work and income for locals selling their vivid headdresses of hand made ‘feathers’ to tourists.

And more good news for Blue-throated Macaws: conservationists from Asociación Armonía discovered an entirely new roosting site of this rare bird. Hopefully a sign that these gorgeous creatures are making a comeback.

So how do birds get their colours?

We already know why all the colours and patterns in birds’ feathers. They serve one of two purposes: camouflage as protection from predators; or finery to attract a mate. No-one knew where the colours came from until a recent study undertaken by Dr Ismael Galván and his team.

Interestingly, birds cannot themselves produce carotenoids. So if they want bright feathers, they have to eat foods rich in the stuff. The carotenoids are carried in the bloodstream to the feather follicles. Melanins on the other hand are synthesised in birds’ bodies by cells called melanocytes.

One third of the 9,000 species of bird studied had complex plumage patterns, most of which are produced by melanins. So the rule is, patches of bright colour – carotenoids. Subtle and complex patterns – melanins.

But that’s not the whole story

Some Canadian woodpeckers are seeing red – that is if they’re looking at each other, because their feathers have taken on an inexplicable rosy hue. It’s like this: the Northern Flicker woodpecker has two populations, the “yellow-shafted” in the east and the “red-shafted” in the west. The shaft is of course, the feather’s central ‘spine’. 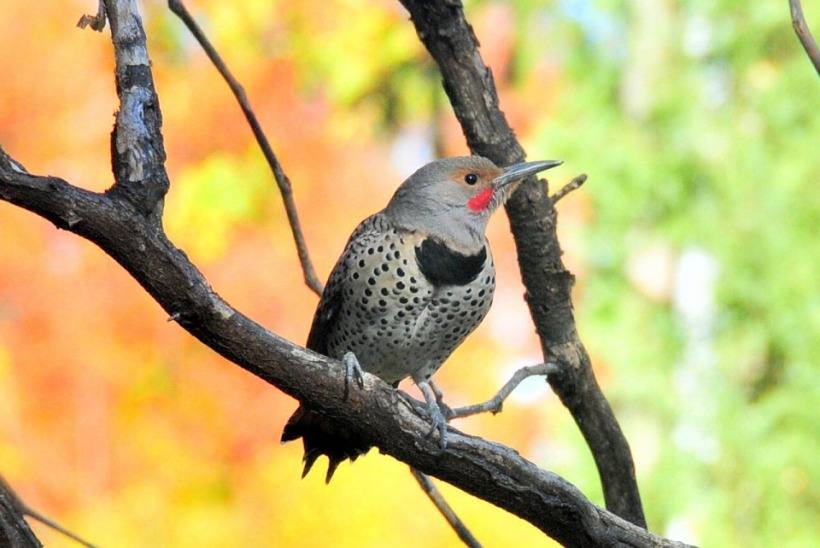 Well, now the puzzle is solved. In the autumn the eastern birds feast on a bounty of bright red honeysuckle berries. It turns out that the red of the western birds does indeed come from carotenoids, but the red in the eastern birds comes courtesy of the berries, from another compound altogether – rhodoxanthin. That to me has a toxic ring to it, but clearly the Flickers are not getting poisoned.

There is a downside. The berries in question are the fruits of two invasive species of honeysuckle. And because the new red hues they are creating in the birds come from rhodoxanthin not the usual carotenoids, other Flickers could be bamboozled into picking the wrong mate. Normally, bright colours equals plenty of carotenoids. equals a well-fed bird, equals a fit and healthy prospective partner. It “could have major implications for mate selection if plumage coloration no longer signaled a bird’s body condition.” Who knows how that could affect the population long term.

And it’s not just the Flickers. Cedar Waxwings’ feathers are turning orange too. Dr Hudon of the Royal Alberta Museum is afraid this is not the last we will see of birds displaying unexpected colours.

From colour to camouflage

We all know that animals’ fur or feathers is often the perfect camouflage ‘design’ for concealing them in their own habitat. Some are hiding from predators, and others are concealing themselves from their prey. And as we also know, though all tigers have stripes, no two tigers’ stripes are quite the same.

But what scientists from Exeter and Cambridge Universities discovered about animal camouflage is mind-blowing. In this instance they were looking at not a predator like the tiger, but 9 species of birds who, as ground-nesters, have a particular need to mitigate their chances of being prey. And they found that not only are those species wonderfully camouflaged for their habitats, but individuals within a bird species choose a place to nest that best matches their own individual colours and markings.

“This is not a species level choice.” Prof Martin Stevens tells us. “Individual birds consistently sit in places that enhance their own unique markings, both within a habitat, and at a fine scale with regards to specific background sites.”

And even more amazing, the individuals are tailoring their choice of nesting sites to the visual systems of their main predators! Like seeing themselves through the predator’s eyes. Isn’t it remarkable? How do they do it? How do they even know what they look like? As yet no-one knows, so exciting as this is, there could be more to come.

Looking back, it seems we have travelled quite a distance from Bud the African grey, witness to murder. But from each little piece of this post (for me, and I hope, for you) emerge two common take-aways  – the ever-amazing genius of birds, and the wonder of Nature. The mysteries and marvels of Nature we will never fully fathom. Nature is an irreplaceable treasure, and to lose even the smallest scrap of it is tragic beyond measure.

If we want to help stem the loss, here are 50 Easy Ways to Save the Planet Although this list dates from 2002, it’s still entirely relevant. We can all make a difference.

The single biggest adjustment we can make to our lifestyles though, is missing from that list – cutting back on meat and dairy. “Human carnivory—and its impact on land use—is the single biggest threat to much of the world’s flora and fauna.” Science

An Enchantment of Birds