It’s Christmas. Time to put your feet up. Ready for a festive quiz question to mull over with your mince pie, cuppa, glass of wine?

How many acorns does a squirrel need to stash to get him/her through the dark cold days of winter?

I’ll give you a few clues:

By my reckoning that’s about 37 and a half average-size acorns a week. And if December, January and February together add up to 13 weeks, it makes the seasonal total 488 to the nearest nut. That’s a lot of acorns to bury – and importantly, find again.

Have you ever played that party game where you are presented with 25 random household objects on a tray, you have 1 minute to study them before the tray is removed, and then you have to write down every item you can remember?

Well, I hate to tell you this but when it comes to memory, a squirrel is a pretty major contender for the prize. Because research has it that a squirrel remembers where it has hidden a good 95% of its nut-shaped snacks.

This year I planted 343 spring-flowering bulbs in my garden, and I had to mark everything with small sticks to avoid digging up bulbs already planted, while planting more. No way could I remember where 343 bulbs were buried, so remembering approaching 500 tiny burial spots under a carpet of fallen leaves is a feat indeed. (But maybe that’s just me🤔)

Squirrels bury thousands of nuts over a lifetime. And in spite of stuffing themselves with tons and tons and millions of pounds worth of seed from garden birdfeeders every year here in the UK, and our calcs came up with a mere 500-nut figure for one squirrel to survive the winter, he/she may actually cache as many as 3,000 nuts a year.

3,000 and they still remember exactly where 95% of them are buried. How is that possible? 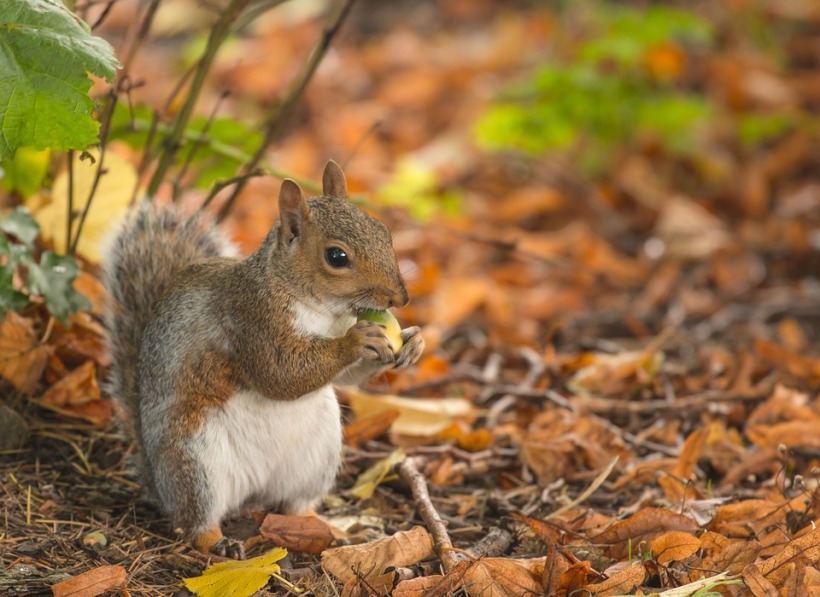 Grey squirrels “scatter-hoard”, so it’s one nut, one hole. But it’s not random. They sort their harvestings, clustering each type of nut or seed with its kind. It’s called “chunking”, and helps to “decrease the memory load”, as scientists put it.

They also sort their stash according to their ‘best before date’ – how long they are likely to ‘keep’ once buried. And by the acorns’ tannin content. Our squirrels are not partial to the bitter taste – nice white tannin-light acorns are for eating right away. The darker tannin-heavy nuts are buried, left to leach out some of the compound over time. Both of these ways of sorting the nuts may also serve as aides memoire. “That patch is where I put my bbf-February stash, and that one my vintage acorns ‘brut’.”

It used to be thought that the little tree dwellers had awful memories and located their buried chow by scent. But what if, as does happen, several squirrels cache their hoards in the same area? How would they tell theirs apart from the others? Don’t all acorns smell much of a muchness?

For our clever furry friends, it’s no problem. A 1991 study tested them out in just such a situation and found individual squirrels were easily able to locate their own personal caches. So it can’t just be that delicious nutty smell that’s guiding them straight to target.

“From my own observation, I think they are using landmarks,” says Japanese researcher Pizza Ka Yee Chow. “They recognise the trees, and they are gauging the distance between themselves, the tree and their own nests.” (Besides, simply following their noses wouldn’t be much use when the earth is covered in a blanket of snow.)

Of course, that doesn’t mean they’re above a bit of opportunistic thieving from each other. From a convenient lookout in a nearby tree they watch their counterparts burying acorns and hiding the signs of soil disturbance with a careful sprinkle of autumn leaves. Waiting until the hoarders are gone, the watchers get right in there and dig up their ill-gotten swag. 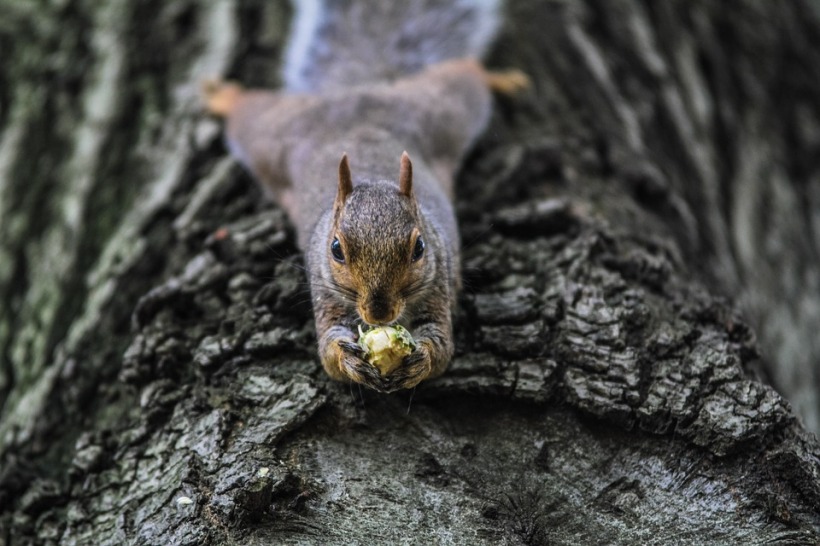 (Perhaps the surprisingly huge number of nuts cached is in anticipation of such lawless looting. And also allowing for the 5% they will probably forget. No squirrel is perfect!)

But forewarned is forearmed. If the hoarders realise they’re under surveillance, they only pretend to cache the nut, then strew the leaves and scurry off to bury it in a spot safely away from prying squirrel eyes.

It’s not just in their remarkable ability to locate vast numbers of nuts that they top the leaderboard for memory. The squirrel’s longer term recall is enviable too. In her 2017 study, the same researcher found that once a squirrel has solved a problem to get an edible treat, when presented with the same problem after a gap of 2 years, they instantly remember exactly how they did it the first time.

“These little creatures may be way smarter than we thought,” she says.

They may have got the measure of their thieving fellows, but here comes another woodland robber, the cunning blue jay.

Still, in spite of sitting there watching the squirrel bury the nut, it can’t be said the jays home in on the precise location first try. Come on jays, you’re supposed to be clever corvids.

Perhaps the squirrels can keep the Best Memory trophy after all.

(Even though no-one still seems entirely sure exactly how they do it.)

Love squirrels? You may want to watch the BBC’s Super Squirrels. Apparently fox squirrels can remember where they buried 9,000 nuts! Super squirrels indeed.

PS Just to put in a good word for the much-maligned grey squirrel :-

“Nuts clearly are dependent on either gravity or animals for dispersal. Squirrels are one of the most important species in this regard.

“But not all squirrels provide this service. Red squirrels store nuts in piles on the ground. Those piled-up nuts tend to dry out and don’t take root. Whereas grey squirrels bury nuts all over the place, and [sometimes] forget them. That results in trees [like oak, beech and hazel] growing in new areas.”

Grey squirrels are not simply forgetting where they put 5% of their autumn nut haul, they are providing eco-services😊

May peace and compassion reign over all living beings this Christmas, and may we each play our part in 2019 to help liberate the world’s oppressed, human and non-human.

How Do Squirrels Remember Where They Buried Their Nuts?

6 thoughts on “How Do Squirrels Remember Where They Buried Their Nuts?”