“Otters are… cute, romantic, loyal and intelligent. They hold hands to ensure they don’t float away from each other, live in close family units, use tools to access food, and pat stones in the air and then roll them around their bodies. These unique behaviors and human-like characteristics have made them hugely popular animals, globally. “

(And that, sadly is their undoing.)

“Aw, adorable!”, we find ourselves murmuring. It’s an instinctive human response when we encounter other animals – especially the cute furry ones – in photos, videos, nature films, or if we’re really lucky, in the flesh.

Our desire for face to face encounters in particular is all down, it seems, to “our natural affinity for life… the very essence of our humanity [that] binds us to all other living species.” So says the blurb on the book ‘Biophilia’, authored by renowned naturalist E. O. Wilson. He believes we are born with this urge to connect with other life forms. It’s innate, he says, hardwired into our biology. “Our existence depends on [it], our spirit woven from it.”  Biophilia– love of what lives.

But nowadays we have a problem giving expression to this instinct. Our increasingly urbanised life offers fewer and fewer chances for animal encounters. Right now 3 million of us are moving to cities every week. By roughly 2040, it’s expected 66% of the world’s population will be living in cities.

Nonetheless, “even in urban environments, the animal connection is real and strong. We need to live with animals because they offer us so much, not the least of which is someone to love.” – paleoanthropologist Pat Shipman. I think she’s nailed it right there, don’t you?

So, given we have that innate need for animal connection, where can we find ways to satisfy it in the city, especially in the busiest, most crowded city of all with 38 million humans squeezed into it, Tokyo, Japan?

The answer for many lies in caring for a cat or a dog, hopefully rescued ones. That may not be so easy for the residents of Tokyo. Housing here is at a premium – often there is just no room for companion animals, and many landlords forbid them. On top of that, few people would have time to take care of them since Japanese culture dictates notoriously long working hours. (Shockingly, the Japanese have a specific word for death attributed to overwork – “karoshi“.)

Now stir the following disparate ingredients into the Tokyo mix:

And what does it all add up to?

Which for a price, offer the promise of half an hour’s cuddle time to city dwellers and visitors in need of their animal ‘fix’. 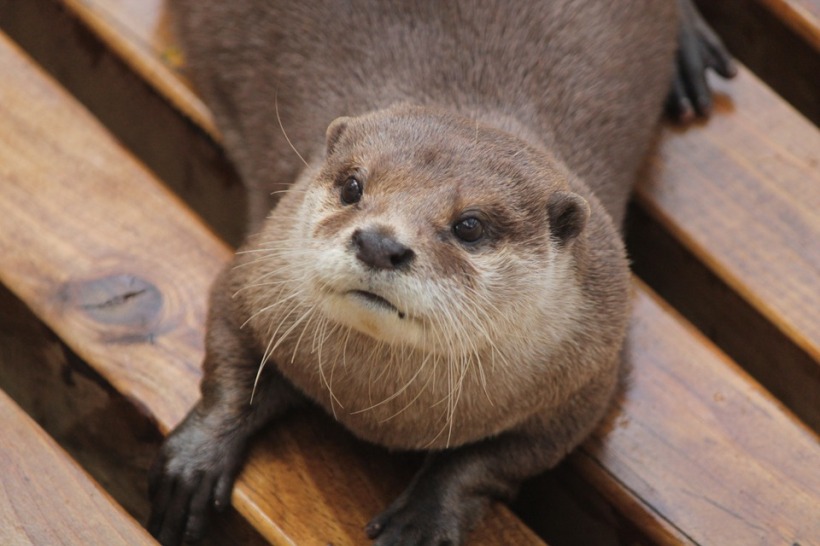 Several of these places appear on TripAdvisor. In some cafes, visitors are let into a small room containing the otters, and are allowed “to run riot” with them. In others, the otters remain caged and visitors can feed them through small holes.

But however the individual cafes are organised, and however much the visitors enjoy their encounters (and most really do. Only 11% of visitors to one cafe left reviews on TripAdvisor expressing real concern for the animals), one thing is guaranteed:

No good whatever is to be had for the otters themselves. It’s quite tragic that the very love people have for, and want to give the furry creatures, “translates into behaviour that is incredibly harmful to the animal,” says World Animal Protection’s global head of the Wildlife. Not Pets campaign.

“The otters are heard whimpering, shrieking and making distress calls while customers are interacting with them. Some are kept in solitary conditions with no natural light, others are seen biting their claws and exhibiting traumatized behavior – some of the worst housing conditions included small cages with no access to water.”

One otter seen by the WAP team was so stressed it had bitten the end of its tail off.

Even apart from the suffering of a wild animal kept in captivity, otters do not make for good petting, or for good pets, even though well-edited video clips might lead you to think so. When WAP visited Instagram star Takechiyo in his home for example, they saw him looking very cute and placid for a few minutes, picking up small pieces of cat food and popping them into his mouth.

“However, the illusion was quickly shattered as he then went on a tour of destruction around the house; climbing on all the furniture, chewing, shrieking, and even biting and scratching our translator. It was a lightbulb moment – otters may look cute, but they make terrible pets. Otters are best observed at arm’s length and in the wild.”

Orphans stolen from the wild

The otter craze is not confined to Tokyo. It’s sweeping across Southeast Asia. In Thailand for example, there are at least 10 large Facebook groups devoted to keeping pet otters. Otter-mania is hiking sky-high the price on the animal’s head. Just one can fetch several thousand dollars. And where there is money to be made, there is no shortage of people with few scruples wanting a piece of the action. To supply the booming market, farmers, hunters and traffickers are shooting or electrocuting adult otters and stealing their babies. Even law enforcement agencies and government officials are involved, and it’s thought likely there are links to organised crime.

As a result, three out of four otter species found in this part of the world are now at risk of extinction, according to the IUCN.

What can we do?

The good news is, there are a number of positive steps we can all take to help captive otters in Asia, and indeed other wild animals.

1  Let’s Shut Them Down Now petition

It’s all too easy to click on some cute animal video, to comment or follow. Let’s pause for a moment. Is it a wild animal taken from its natural habitat? Then it’s certain to be suffering for our entertainment. World Animal Protection suggests instead of the automatic click, we change the conversation online about keeping wild animals, like otters, as pets. “Every ‘Like‘ ” they say, “leads to a lifetime of cruelty.”

If you’re planning a trip abroad, you can actually play a part in the detection of illegal wildlife trade. You may spot wild animals being sold in a local market for example. “The Wildlife Witness smartphone app allows tourists and locals to easily report wildlife trade by taking a photo, pinning the exact location of an incident and sending these important details to TRAFFIC“ – says their website.

6  Watch otters the proper way – in the wild. Check here

8  Support the rehabilitation work of Cikananga Wildlife Centre in Indonesia. You can also volunteer at the centre

This is not a case of Westerners pointing the finger eastwards. We have exactly the same problem on our doorstep, only the ‘cute cuddly’ animal in question here is the ring-tailed lemur, taken from tropical Madagascar to the Lake District, northwest England. Armathwaite Hall, a hotel and spa resort near Keswick, offers ‘lemoga’ – outdoor yoga in the company of the primates. Carolyn Graves, owner of the hotel, says: “Lemoga offers our guests the chance to feel at one with nature, at the same time joining in with the lemurs’ playtime.”

“I don’t think you ever see an unhappy zookeeper. We spend all our time with animals. We know how it makes us feel and if we can give a little piece of that to people then great.” Interestingly, he omits to say how the animals feel about it.

It’s just a crying shame that we so often give expression to our natural desire for animal connection in a way that is a thoughtlessly one-sided affair.

Wildlife Tourism: Good or bad for the Animals?

Cecilia Blazes the Trail – Or Does She?

Persons not Property – Could the Tide be Turning?